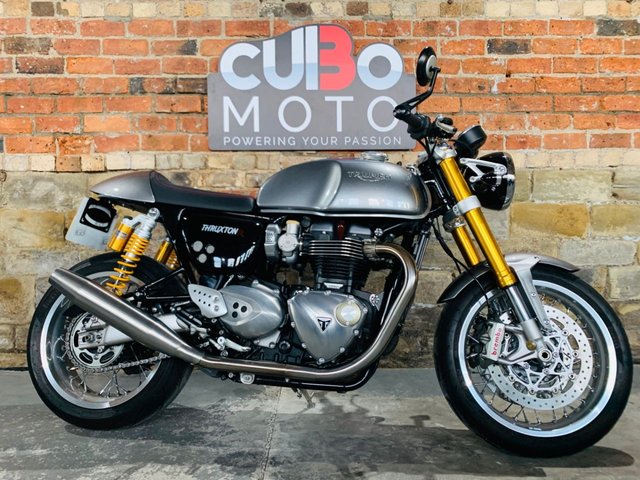 Triumph has produced the Thruxton worthy to carry it's name to a new generation of owners. The styling and attention to detail lavished on the Thruxton is second to none. This is possibly the ultimate modern classic that is laden with exotic components. The R's handling is right out of the top draw thanks to excellent brakes, suspension and chassis balance. The electronics marry the whole package together. The Thruxton R comes with Single bullet seat with painted seat cowl, Twin floating Brembo discs with Brembo Monobloc radial calipers, Brembo master cylinder, fully-adjustable Showa big piston forks and Öhlins twin rear shocks, polished top yoke, stainless steel tank strap and clear anodized aluminium swing arm. Powered by a 1200cc parallel twin engine theres plenty of performance to match the looks, and with the Remus exhausts, it sounds as good as it looks! 2 Keys, Remus Exhausts, Tail Tidy 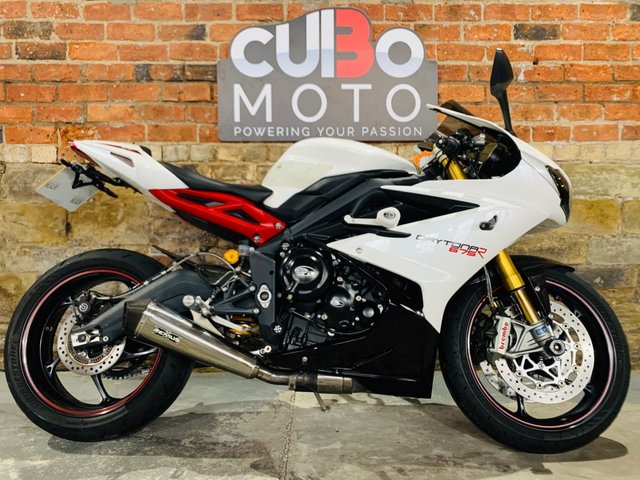 Faster, better handling, easier to ride and with an even angrier engine note, the Daytona 675R took Triumph's supersport weapon to another level. Launched alongside the standard Daytona 675, it was the first major update since the 675's release in 2006. Every inch of the machine is different. There are new twin-injector throttle bodies, ECU and a bigger central air intake running through the headstock. A new slipper clutch has a two-way ramp for extra slip and grip on and off the throttle. The exhaust is repositioned up and under the engine to aid weight distribution. Very few bikes handle as well as this out of the crate and even fewer are as easy to ride fast. The R model's Ohlins suspension and Brembo brakes move the bike's limit way above the average rider. Road holding is excellent, the ride quality plush and the bite from the brakes incredible. This example comes with all the nice extras you would want, including a Remus Exhaust. 2 Keys, ABS, Remus Exhaust, Brembo Brakes, Ohlins Suspension, Carbon Fibre Heel Plates, Carbon Fibre Front Fender, Carbon Fibre Rear Hugger, R&G Radiator Guard, R&G Fork Protectors 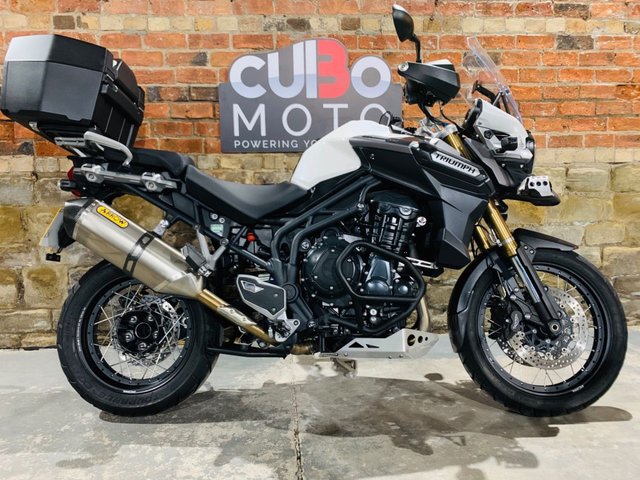 The Tiger Explorer XC is ready for your next adventure. The XC isn't just designed to get you noticed. It's designed to go the distance on road or off the beaten track. That's because it has the Explorer's incredible dynamic handling, plus all the kit you need to keep going when things get challenging, including new aluminium rimmed, steel spoked wheels with tubeless tyres, hand guards, engine bars and fog lights. That's on top of the shaft-driven 1,215cc triple that produces 137PS and 121Nm of torque, the cruise control and switchable ABS. This example has an Arrow Exhaust, Top Box and Heated Grips, with only 2 owners from new and very low miles! 2 Keys, Arrow Exhaust, ABS, Triumph Top Box, Engine Bars, Heated Grips 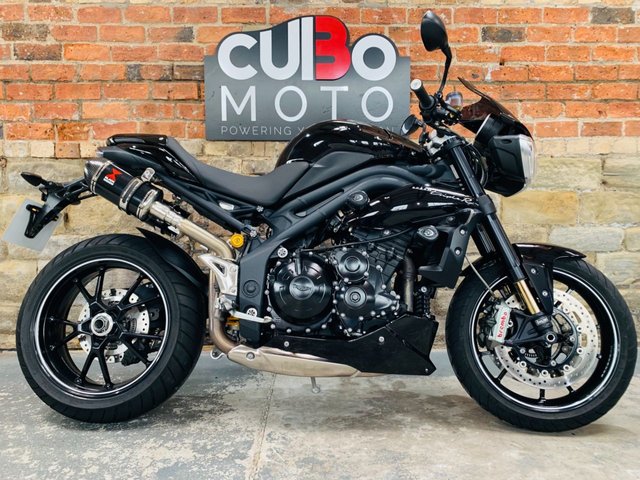 This Triumph Speed Triple 1050 R 94 edition has bags and bags of style and is literally as sweet as honey. The Gloss Jet Black colour scheme is pretty incredible to look at! The beauty of this bike does not stop at its appearance however, with some pretty impressive performance specification setting beneath the rider, such as fully adjustable Ohlins front shocks and TTX rear shock, switchable ABS and Brembo M4 Monobloc brake callipers. All this help maintain an incredible riding experience, which is driven by the R's 138bhp producing inline triple. A gorgeous set of Black Widow Exhausts sits nicely at the rear, to complete this awesome offering. 2 Keys, Black Widow Exhausts, ABS, Ohlins Suspension, Service History, Powerbronze Tinted Fly Screen, Short Black Adjustable Levers 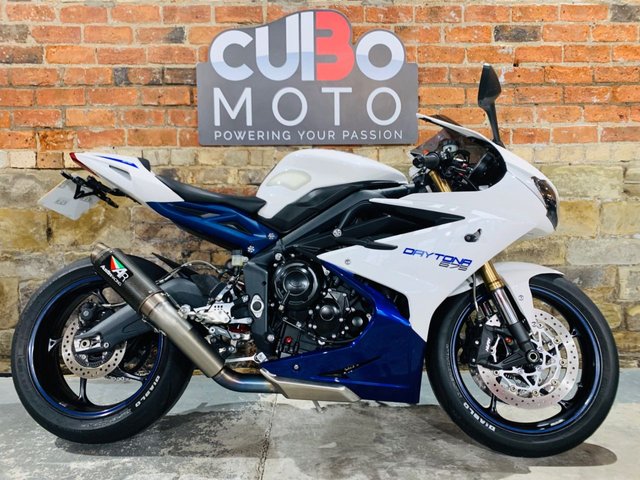 Since its launch in 2006, Triumph's Daytona 675 has consistently been judged as the best supersports bike money can buy. For more than six years, the screaming three cylinder motor combined the best attributes of a supersports bike with more torque than most of its rivals, ensuring it lapped faster than any of its rivals on track and outpaced them on the road too.With just a few tweaks the Daytona 675 (and more expensive 675R) could have continued its dominance over the Japanese and Italians, but Triumph are on a roll at the moment and that wasn't good enough for them. So instead of just giving it a lick of paint, they created an all-new bike with new engine chassis, suspension, brakes, wheels, and styling and made the best even better. The new bike is immense and one of the best handling bikes you will ever ride, with switchable ABS with a mode that allows you to move the rear tyre around on Circuit mode, and a slipper clutch as standard. This example is fitted with loads of Triumph Extras, and an Austin Racing Exhaust! 2 Keys, Austin Racing Exhaust, Triumph Quickshifter, Triumph Rear Sets, Triumph Levers, Triumph LED Indicators, Datatool Alarm, Carbon Fibre Heel Guards, Tinted Screen, Seat Cowl

This motorcycle truly epitomises the spirit of Triumph. Agile, fun, punchy, brimming with character, up for anything and great to look at. Its 675cc three-cylinder engine bubbles, growls and wails as you wind it up through the gears and, thanks to an all-new chassis, the handling is now even sharper and more intuitive than it's ever been. And that's saying something. The bodywork is new too. Colours appear as sharp slashes down the length of the bike from the slender tail section to the lean-looking tank, narrow radiator side cover and the front mudguard. Neatly finished by the striking new wheel design. You'll find yourself using the Street Triple 675 R for anything from long runs to traffic busting. Triumph have created a machine that can turn the dullest regular commute into pleasure trip. 2 Keys, R&G Crash Bungs, R&G Bar Ends, Colour Coded Flyscreen and Bellypan, Paddock Stand Bobbins, Tank pad, Seat Cowl 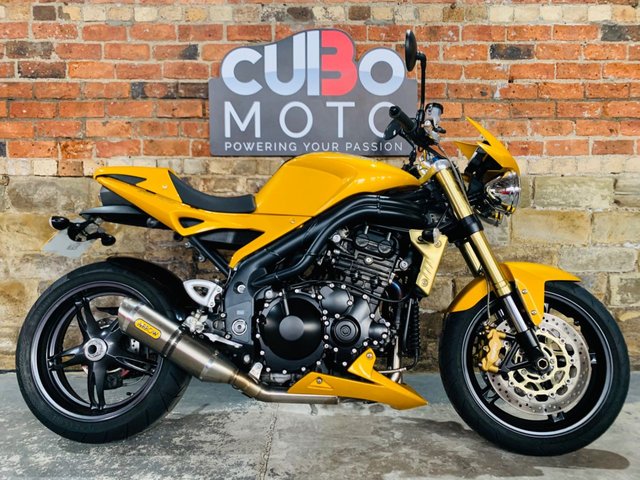 This is a fine example of Triumph's popular Scorched Yellow Speed Triple 1050. With its Single sided swing arm and gold forks, this bike not only performs well but also looks the part too. Fantastic 1050 Triple motor with loads of torque and smooth power. Aggressive, Athletic and very streamlined this is by far the best bike in Triumph's range! This stunning Speed Triple comes with a Full Low Boy Arrow Exhaust, with only 2 owners from new, complete with all keys, service history and a few other nice extras! 2 Keys, Full Titanium Lowboy Arrow Exhaust, Datatool Alarm, Tail Tidy, Fly Screen, Belly Pan, Tank Pad, Seat Cowl 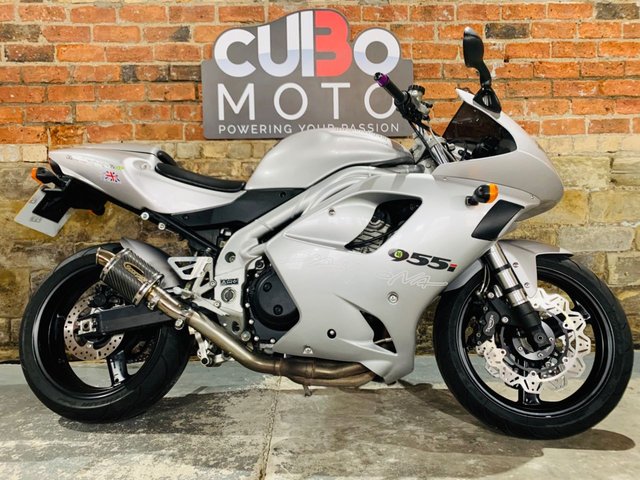 Retro sportsbikes are currently going through a revival as older riders look to recapture their youth. Machines such as the Honda FireBlade, Yamaha YZF-R1, Kawasaki ZX-7R, Suzuki GSX-R750 SRAD and Yamaha YZF750R are seeing their prices climb as decent examples start to become rare. But one bike is still flying under the radar – Triumph's Daytona 955i. We are talking about a 147bhp British superbike here for less than £2300, what's not to like?! If you are after a characterful sportsbike that works fantastically on the road the Daytona 955i is your kind of bike. The triple engine is an absolute pearl and for sporty A and B-road riding it is on the money. Ignore the peak power figures, which are actually quite impressive, and instead focus on the 74ftlb of torque driving you forward alongside that beautiful triple exhaust note. Add to this a chassis that is more than capable of whipping through the bends but does so without any hint of instability and with plush rather than overly firm suspension, not to mention decent pillion provisions, and there are a lot of reasons to reconsider the Triumph Daytona 955i. And do it now, before everyone else catches on to this overlooked British beauty. 1 Key, Short Scorpion Exhaust, Wavy Discs, Double Bubble Tinted Screen, Colour Coded Rear Hugger, Seat Cowl, Bar Ends

A British manufacturing icon, the Triumph name has been associated with classic motorcycles such as the iconic Bonneville since the turn of the 20th century. Today the company is responsible for a superb range of modern classics, from roadsters and supersport bikes through to adventure and touring models. You'll find a great selection of quality used Triumph motorbikes for sale in Huddersfield when you pay a visit to Cubo Moto. Our showroom is stocked with competitively priced bikes and we'll do everything possible to help you find the right used Triumph to suit your requirements. Take a look at our current line-up and don't hesitate to get in contact with a member of the team with any questions.