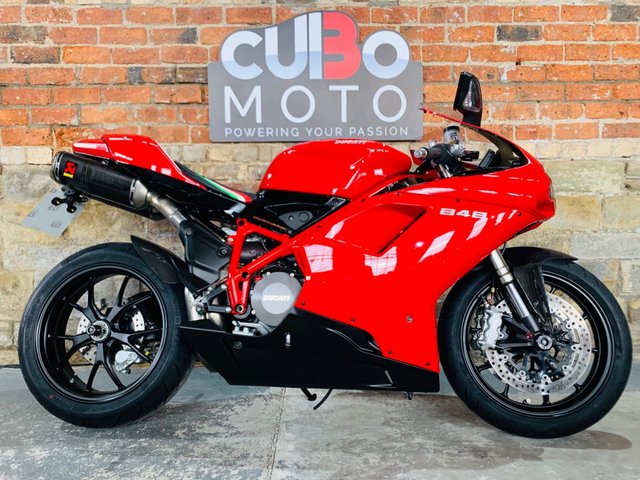 The Ducati 848 isn't just a small 1098, it's much more than that. The 848 is a fast fine-handling, gorgeous Ducati superbike in its own right. It's no longer the poor relation to its big brother, like the 748 and 749 used to be. Although the more powerful 1098 is faster in a straight line and around a track, in the real world the Ducati 848 is every bit as fast. The liquid-cooled Desmodromi, is not just a cheaper sleeved-down version of the 1098's motor. Chassis-wise the Ducati 848 is almost identical to the 1098, save for slightly lower-spec, but still fully-adjustable, Showa forks and Brembo radial brakes. Most significantly the Ducati 848 has a half-inch narrower rear wheel which gives the 848 greater agility and lighter steering than its bigger brother. In true Ducati superbike style the 848 is rock-solid stable in the corners, at the expense of slightly slow steering through flip-flop chicanes and very tight hairpins. This example comes with the Akrapovic Carbon Exhausts! 2 Keys, Akrapovic Carbon Exhausts, R&G Fork Protectors, R&G Paddock Stand Bobbins, Carbon Fibre Rear Hugger, Tail Tidy, Rad Guard, Double Bubble Screen, Carbon Fibre Front Fender, Seat Cowl

Get the best deal on a used Ducati 848 bike for sale in Huddersfield by making your way to Cubo Moto today. You will find every available model listed here on the website, and as all our stock is competitively priced you should have no problem sourcing a pre-owned Ducati to suit your budget. Take the opportunity to browse our current range online before contacting a member of the showroom team to find out more. Our friendly and knowledgeable staff will be more than happy to answer any questions and provide advice and guidance when necessary. Alternatively, why not pay a visit to our showroom in person and take a closer look at the selection of used Ducati 848 models for sale.