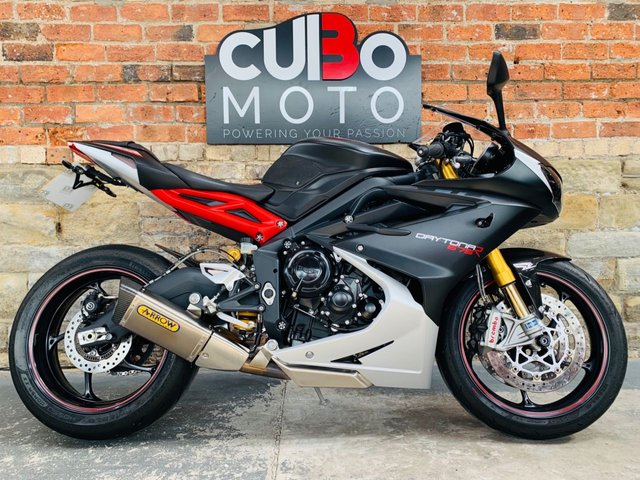 Faster, better handling, easier to ride and with an even angrier engine note, the Daytona 675R took Triumph's supersport weapon to another level. Launched alongside the standard Daytona 675, it was the first major update since the 675's release in 2006. Every inch of the machine is different. There are new twin-injector throttle bodies, ECU and a bigger central air intake running through the headstock. A new slipper clutch has a two-way ramp for extra slip and grip on and off the throttle. The exhaust is repositioned up and under the engine to aid weight distribution. Very few bikes handle as well as this out of the crate and even fewer are as easy to ride fast. The R model's Ohlins suspension and Brembo brakes move the bike's limit way above the average rider. Road holding is excellent, the ride quality plush and the bite from the brakes incredible. This example comes with all the nice extras you would want, including a Arrow Exhaust System. 2 Keys, Arrow Exhaust System , Triumph Fork Protectors and Paddock Stand Bobbins, R&G Tail Tidy, Triumph LED Indicators, Carbon Fibre Rear Hugger, Front Fender and Infill Panels, Tank Pad

Get the best deal on a used Triumph Daytona 675 bike for sale in Huddersfield by making your way to Cubo Moto today. You will find every available model listed here on the website, and as all our stock is competitively priced you should have no problem sourcing a pre-owned Triumph to suit your budget. Take the opportunity to browse our current range online before contacting a member of the showroom team to find out more. Our friendly and knowledgeable staff will be more than happy to answer any questions and provide advice and guidance when necessary. Alternatively, why not pay a visit to our showroom in person and take a closer look at the selection of used Triumph Daytona 675 models for sale.