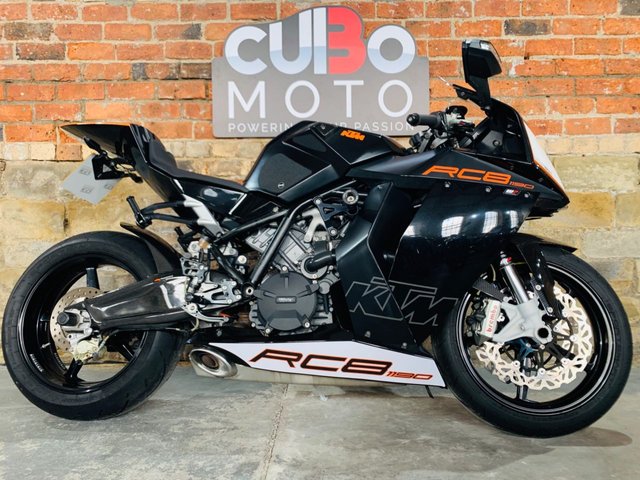 The KTM RC8 is a bike from the future, just at first glace you can see how much effort has gone into the design of the bike. The front fairing makes the bike look aggressive accompanied by the underbelly exhaust and tall pointed tail. The v-twin engine produces around 150hp as claimed by KTM and is ready to go as soon as you fire it up. The WP suspension and steering damper (this example has an upgraded GPR steering damper), come direct from the factory and have been developed over a number of years providing smooth riding on the road, these features make the bike really nimble no matter what corner you are leaning into. All this power and development with the suspension is accompanied by Brembo monobloc calipers, lightweight machesini wheels and a motogp style dash that can be altered with the flick of a button on the switch gear. Ktm RC8's are becoming rare and finding a clean example is near impossible, this one is loaded with extras! 2 Keys inc Orange, GPR Steering Damper, ASV Levers, Swing Arm Protectors, Rear Sets, GB Racing Crash Bungs, GB Racing Engine Covers, Carbon Fibre Tank Pad, Carbon Fibre Rear Hugger, Carbon Fibre Front Fender

Get the best deal on a used KTM Rc8 bike for sale in Huddersfield by making your way to Cubo Moto today. You will find every available model listed here on the website, and as all our stock is competitively priced you should have no problem sourcing a pre-owned KTM to suit your budget. Take the opportunity to browse our current range online before contacting a member of the showroom team to find out more. Our friendly and knowledgeable staff will be more than happy to answer any questions and provide advice and guidance when necessary. Alternatively, why not pay a visit to our showroom in person and take a closer look at the selection of used KTM Rc8 models for sale.