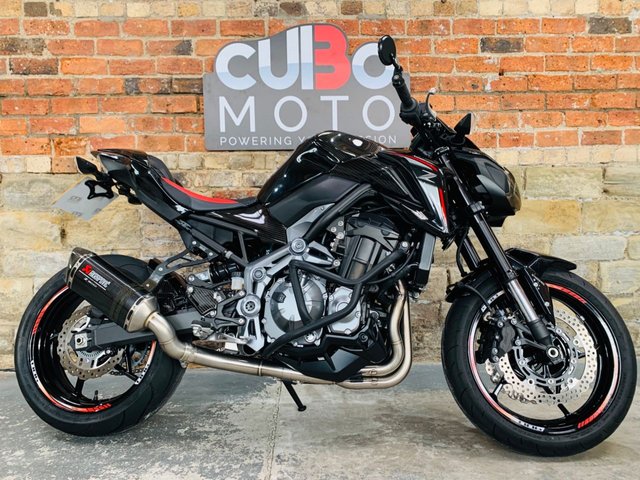 The Kawasaki Z900 power plant is essentially a sleeved down Z1000 engine. Overall the Kawasaki Z900 is some 20 Kg (3 Stone!) lighter than the Z1000 so the power to weight ratio that Kawasaki have achieved for the Z900 is awesome. This sleek, lighter and lower chassis means that the Z900 will fit a much broader range of rider sizes but also results in a lower centre of gravity for the bike. The Kawasaki Z900 from head to tail is unmistakably "Z". The aggressive poised animalistic stance is typical of any of the bikes in the Kawasaki "Z" family. This example is only one owner from new and has loads of extras, including the awesome looking Carbon Hydro Dipped panels! 2 Keys, Akrapovic Exhaust, Health Quickshifter, ABS, Hydro Dipped Panels, Custom Seat, Bar End Mirrors, Screen, Tank pad, R&G Tail Tidy

Get the best deal on a used Kawasaki Z900 bike for sale in Huddersfield by making your way to Cubo Moto today. You will find every available model listed here on the website, and as all our stock is competitively priced you should have no problem sourcing a pre-owned Kawasaki to suit your budget. Take the opportunity to browse our current range online before contacting a member of the showroom team to find out more. Our friendly and knowledgeable staff will be more than happy to answer any questions and provide advice and guidance when necessary. Alternatively, why not pay a visit to our showroom in person and take a closer look at the selection of used Kawasaki Z900 models for sale.