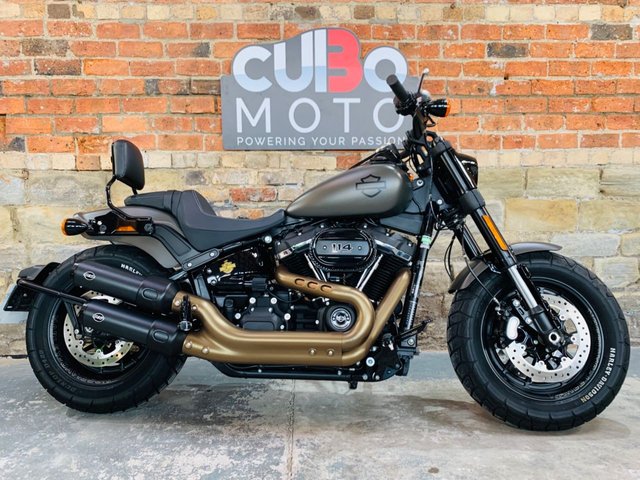 Faster, lighter, stiffer and more aggressive new Fat Bob exemplifies both Harley's all-new Softail family and the US firm's renewed ambition in this market! The new tubular steel double cradle is also claimed to be substantially lighter, stiffer and comprise far fewer components. Three different head angles, two shock lengths and two widths of swing arm are also employed in a modular approach to create the eight different models. The Fat Bob, with a 28º head angle, has the sportiest attitude of the lot along with inverted forks and twin discs. The result is Harley's purest, best performing hot rod ever with handling that is noticeably stiffer and with a ride that's far more compliant, controlled and cultured than the old Softail which were often hampered by limited suspension travel and crude damping. This bike is a must for any Harley fan! S&S Grand National Slip On

Get the best deal on a used Harley-Davidson Softail bike for sale in Huddersfield by making your way to Cubo Moto today. You will find every available model listed here on the website, and as all our stock is competitively priced you should have no problem sourcing a pre-owned Harley-Davidson to suit your budget. Take the opportunity to browse our current range online before contacting a member of the showroom team to find out more. Our friendly and knowledgeable staff will be more than happy to answer any questions and provide advice and guidance when necessary. Alternatively, why not pay a visit to our showroom in person and take a closer look at the selection of used Harley-Davidson Softail models for sale.