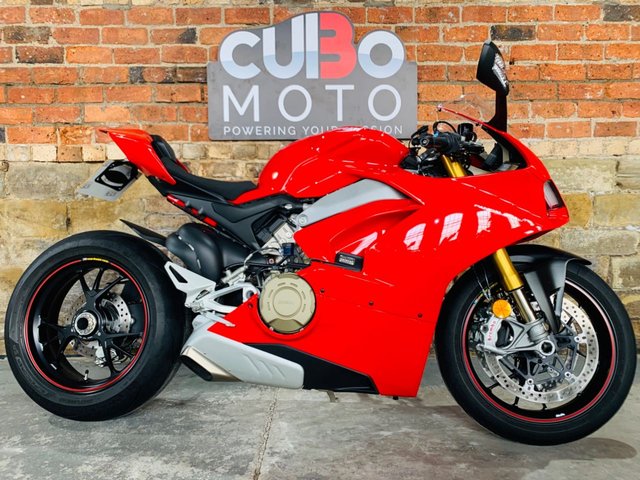 After years of stunning V-twin sportsbikes, Ducati pulled off a masterstroke giving their top-of-the-range superbike a V4S. It's genius – the perfect way to move on a V-twin concept that had reached the end of its development path while still allowing the bike the soul it needs. There is no doubting that this is a step forward from Bologna and they've made the most desirable sportsbike on the planet, with amazing, light handling, superb power delivery and the kind of top-end rush that skews your senses and tests your sheer ability to hold on. With 211bhp, a new MotoGP-style frame and some of the most advanced electronics in the world, Ducati's V4S Panigale replaced the 1299 Panigale in Ducati's superbike line-up and forms the basis of their 2019 WSB challenger. Ducati said at its launch that it was the fastest, most powerful production bike that the world had ever seen! This example has only one owner from new, and has some nice extras added to an already stunning bike! 2 Keys, Evotech Rad and Oil Coller Guards, Evotech Bar Ends, Evotech Fuel Tank Cover, CNC Reservoir Caps, USB Charger, Tail Tidy, One Owner From New, Tank Pad

Get the best deal on a used Ducati Panigale V4 S bike for sale in Huddersfield by making your way to Cubo Moto today. You will find every available model listed here on the website, and as all our stock is competitively priced you should have no problem sourcing a pre-owned Ducati to suit your budget. Take the opportunity to browse our current range online before contacting a member of the showroom team to find out more. Our friendly and knowledgeable staff will be more than happy to answer any questions and provide advice and guidance when necessary. Alternatively, why not pay a visit to our showroom in person and take a closer look at the selection of used Ducati Panigale V4 S models for sale.