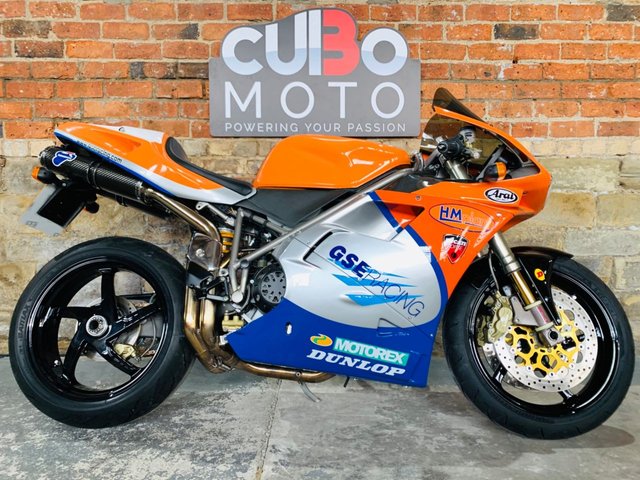 "It's like having an affair without being unfaithful" Exotic, beautiful, and iconic – the 996S is a love affair that never ages. A rare chance to own the iconic 996S. Here we have for sale the iconic Ducati 996S Neil Hodgson Replica. One of only 35 bikes produced to commemorate Hodgson's success at the 2001 Brands Hatch WSB championship. Built by Ducati's factory owned UK subsidiary the motorcycle is converted from the standard 996S specification which includes conversions such as a full Termignoni system, tinted screen and Ohlin's suspension as well and plenty of carbon fibre extras such as air box, swing arm cover, Ducati Performance air tubes, sprocket cover and number plate holder. It's stunning orange and silver livery is identical to that of the GSE racing Ducati's as ridden by Hodgson and Toseland. 1 of 3 actually signed! This bike would be a fantastic addition to any serious collection. Termignoni Exhaust System

Get the best deal on a used Ducati 996 bike for sale in Huddersfield by making your way to Cubo Moto today. You will find every available model listed here on the website, and as all our stock is competitively priced you should have no problem sourcing a pre-owned Ducati to suit your budget. Take the opportunity to browse our current range online before contacting a member of the showroom team to find out more. Our friendly and knowledgeable staff will be more than happy to answer any questions and provide advice and guidance when necessary. Alternatively, why not pay a visit to our showroom in person and take a closer look at the selection of used Ducati 996 models for sale.