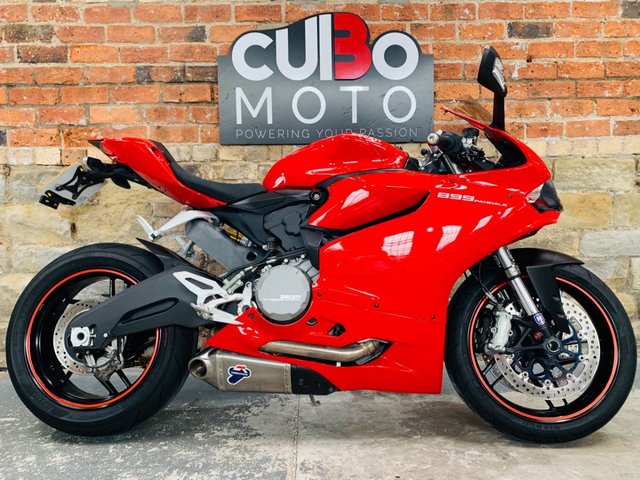 A step forward from the 848, The 899 is stacked with rider aids like traction control, ABS, EBC (Engine Brake Control) all as standard plus a quick-shifter. The ergonomics are more rider friendly than the 848, it's easier and more forgiving and it looks stunning mirroring the line of the original Panigale. But, more importantly, the 899's quicker and lighter than 848 too. The double-sided swingarm is shorter, lighter and stiffer than the single-sided version on the 1199. This is accompanied by showa adjustable front forks and a sachs rear shock. The 899 also has Brembo monobloc callipers fitted and the new state of the art Ducati multifunctional instrument panel, ducati has also stepped their game up and fitted the 899 with 3 riding modes. This example was previously supplied by Cubo Moto back in 2017 so we know the bike well, and is fitted with the all important Termignoni Exhausts! 2 Keys, Termignoni Exhausts, Ducati Performance Screen, Ducati Performance Tail Tidy, Seat Cowl

Get the best deal on a used Ducati 899 Panigale bike for sale in Huddersfield by making your way to Cubo Moto today. You will find every available model listed here on the website, and as all our stock is competitively priced you should have no problem sourcing a pre-owned Ducati to suit your budget. Take the opportunity to browse our current range online before contacting a member of the showroom team to find out more. Our friendly and knowledgeable staff will be more than happy to answer any questions and provide advice and guidance when necessary. Alternatively, why not pay a visit to our showroom in person and take a closer look at the selection of used Ducati 899 Panigale models for sale.